I’ve had many encounters with Black Dog.
Sometimes I think it’s the same Black Dog, which appears at different times in my life – there are various lessons to learn here.

Black Dog: Being A Teacher

It’s a bit like Go Ha-neul, who faces many struggles as she becomes a temporary teacher for the first time.
I became a teacher to many inspiring stories of hope.
Like Go Ha-neul, after a teacher saved me and schooled me, I decided to become a teacher.
It is years later.
Many, many years later, after I met Him.
Through my struggles, I grew as a teacher and as a person.

As children, we were all spooked with tales of ghosts and the supernatural.
While there are people who believe in the paranormal – most people believe in God.
When your dog sometimes seems to be barking into the night and retreating, there could be something he sees – and you don’t.
Do certain times of the year seem to make them nervous?
The truth is dogs can see or sense something people can’t.
My mom used to tell us children about some connection between dogs and ghosts — and dogs’ mystifying behavior.
If a dog dabbed on your eyelids (not eyes), the tear stains would allow you to see into the spirit world during the Chinese 7th month.
It used to freak the children out, and we would all scream when she told us our favorite ghost story.
The ghost story happened in her hometown in Taiping, Perak.
A man did that and stood at a crossroads in the middle of the night.
He stood with his legs apart to form a V.
He dabbed dogs’ tears on his eyelids and bent over to look backward between his legs.
And The children gasped!
He saw ghosts.
Millions of ghosts.
When I think back, it was quite funny to believe that the man could carry Black Dog tears in a container in his pocket!

I remember Ah Hin, a construction supervisor.
When I was in my 20s, I was in charge of a project in an affluent area.
It was quiet and nearby a park.
There was a handsome stray Black Dog without a collar who lived in the area.
He would bark at me as all dogs do.
He didn’t chase or growl.
He just stood his ground and barked very loudly.
I wasn’t frightened but rather amused.
I was silly because I told Ah Hin about it.
It was one of the meaningless one-liner openings that I sometimes say.
“The Black Dog likes to bark at me.”
I smiled and shrug.
Ah Hin: He chases you?
Me: No.
Ah Hin: He growled?
Me: No.
Ah, Hin: What he do?
Me: Bark loudly. Some people talk loudly too. It doesn’t matter.
Ah Hin: I will take care of him, Miss Doris.
My mistake.
I didn’t know what to take care of him meant.
Subsequent weeks, the neighborhood was quiet.
I would park my car in the same spot.
Territorial Bad Boy – Black Dog was nowhere to be seen.
I remember asking Ah Hin.
Me: Where is my Black Dog? I miss his barking.
Ah Hin: He was gone.
Me: Gone?
Ah Hin: Gone. I gave him BBQ Pork Bun.
Me: You feed him? Does he like BBQ Pork Buns?
Ah Hin: Yes, I put a box of needles into the buns.
I saw Ah Hin gloating and expecting praises from me.
I remember sitting in the container office.

Waves of grief swept over me.

My eyes welled with tears.
I burst out crying.
Me: Black Dog didn’t do anything. Why did you do that, Ah Hin?
Ah Hin: So he doesn’t bite you, Miss Doris.
Me: Please leave. Please don’t speak to me again. Please leave.

I was filled with anguish and took a long time to forgive myself.

Not everyone who wants to protect me is an angel.
Until today – I can not understand why people would hurt animals this way.
But they still do.

When I used to visit Dee, I would enter their house from the side gate. There’s a way that the family opens it.
One afternoon, I dropped by. I say Black Dog’s water dish was leaning against the wall.
I thought to myself.
“He’s run away again to the forest where the family found him.”
Black Dog likes to do this.
He disappears once in a while.
Dee: You know, he thinks he is Indiana Jones looking for the Ark of the Covenant.
Me: You just like the actor Harrison Ford.
So I entered the house, a year since I played with Black Dog.
The gate squeaked sharply.
I made my way up the metal ramp.
Overhead I hear the ringing noise of metal windows opening rapidly.
I froze.

I could see Black Dog race with all its limbs in the air towards me.

Not a single bark.
I knew he would attack.
I Dropped my hands.
Black Dog stopped a good six feet away, tail wagging happily.
He remembered my scent.
He kissed my hands and waited to be petted.
In the house, I heard loud running down the stairs.
The door flew open.
Dee and her family gasped.
His brother said, “We thought he would have ripped you like the monitor lizard that crawled in one night.”
I laughed.
I bend down.
Black Dog sneezed.
I patted him more.
I smiled at the family.

Black Dog remembers who loves him when he’s a puppy. That’s all.

When it comes to Mama Dog and newborn pups, the best advice is to stay away.
I used to work around Beach Street, George Town.
I would have lunch at Ann’s Economy Rice Stall, which she shared with Ah Seng, who sells drinks.
Every lunchtime, I would run down the back staircase of the Behn Meyer building to lunch, a few steps away.
That day I was in another building.
I decided to take a short cut through an alley.
On my first and last short cut.
I can attest that I still walk down allies in different parts of the world.
Dogs display aggression for several reasons, such as

No matter the reason – bared teeth are a sign of a dog becoming aggressive.
These three adult dogs are past their comfort zone.
Halfway down the alley, I remembered that Black Dog Mama was nowhere to be seen.
She was heavily pregnant a few weeks ago.
Suddenly Papa Dog and two other dogs stood at my sides, growling.
Papa Dog had his face at my abdomen, his two budding growlings loudly at my sides.
There was no way I could leave the dogs alone.
All three stood on their hind legs, and their paws rested heavily on my thighs and abdomen.
My hand at my sides.
My head was reeling.
With a push by all three, I would have fallen backward.

I looked into Papa Dog’s eyes.
I know I’m supposed to avoid eye contact. If possible, carefully step away from the dog. 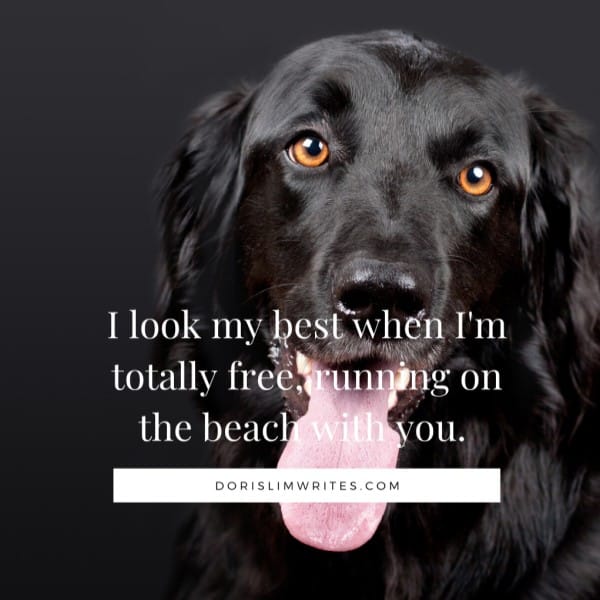 Papa Dog’s face softened.
His mouth relaxed, his ears sitting flatter against the head. He averted his gaze and just stepped away with his companions.
I stood in a daze.

Thank you, Father.” I prayed with gratitude.

I turned to look at Mama Black Dog and the pups. They curled up suckling, and she was asleep from the exhaustion of birth.
I must have caused them so much stress and anxiety just walking by.
The dogs were possibly grinning because they were stressed. I wasn’t afraid, so they didn’t feel threatened enough to get defensively aggressive.