The Story of Salt and Other Stories

I have been thinking about the story of salt and other stories I have encountered.

There are hundreds of varieties of salt worldwide to satisfy those curious about this vital ingredient.

Salt is essential for human life – although harmful when consumed in large quantities, this is the only mineral that humans consume as nourishment.

Salt is an ingredient that enhances the flavor of food and even desserts.

If you love salt like me, you will know that salt is used extensively in areas other than food.

Salt is a precious and rare ingredient.

The first time Ben bought something from his home to the office – we were surprised.

Pat nudged me and whispered loudly, “He bakes!!!”

“Of course. Baking is just science,” I said.

“I prefer shaved Parmesan cheese onto pasta and risotto, meatballs, and Caesar salad.”

Pat shrugged and went to chat Ben up.

She couldn’t understand why I was so unimpressed.

I didn’t tell her that I also baked.

The Story of Salt – What could go wrong?

Using salt instead of sugar is one.

One day I helped Geri baked. Of course, it had to be coincidentally a Carrot Cake with Cream Cheese Frosting.

It was for her 21st birthday.

I have two BIG weaknesses when it comes to baking.

Hard to count this as TWO – it feels like a few hundred.

So, I was tasked with whipping the cream cheese for the frosting.

I put in salt instead of sugar. Geri never spoke to me again.

The Story of Salt – Curry Noodles with Sugar Broth.

I used to eat at the same noodle shop every day for almost a year.

I love the convenience and I’m boring when it comes to food.

There’s no hard and fast rule about eating.

At the Noodle Shop, the rules are simple.

The rest of us (read customers) we just eat, pay, and come back every day.

It was a sure-fire way for a successful Chinese business.

I like to do business and I hate gossip and small talk.

Neysa told me that the owner of the shop she goes to for meals makes too many comments.

The woman owner commented on her dressing.

She commented on her friends.

Owner woman commented when Neysa’s friends paid for her food.

The solution: Just eat at a Chinese operated eating shop.

They bring the food out.

You eat. You pay. You come back tomorrow.

The Story of Salt – Chinese Businesses

I told Neysa that I ate at Mr. and Mrs. Goh’s restaurant/café/Kopitiam/canteen every day for two meals for the year I worked next door.

You got to eat at a Chinese operated business.

No one makes any comments.

That’s the way it goes.

Until one morning at breakfast.

I looked at Mr. Goh, yawning like a Hippopotamus in his corner.

“Why did you make a syrup soup for the Curry Noodles? What’s wrong with you?”

I pursed my lips.

I collected all the half and empty soya sauce containers from all the tables in his restaurant/café/Kopitiam/canteen.

I plonked that on the counter where Mr. Goh serves his Curry Noodles.

“Twenty bowls and my regulars didn’t say a WORD.”

“Well, Mr. Goh, you run a Chinese operated restaurant/café/Kopitiam/canteen. The customers just eat quietly, pay, and leave clues for you.”

“I overslept. I must have put sugar instead of Salt in the Curry Broth.” 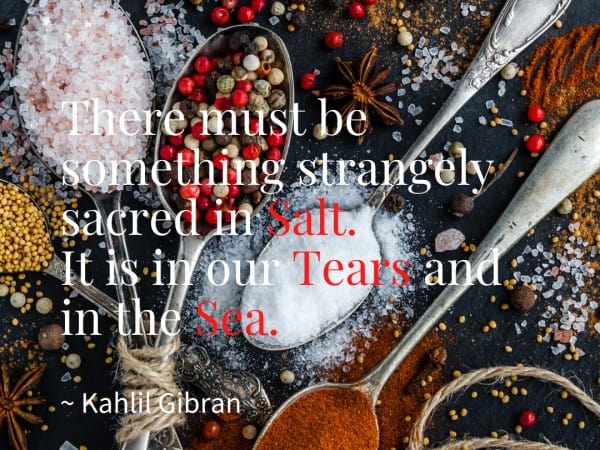 The Story of Salt – I didn’t marry for the disparity.

One day, she said, “I show a family photo. Sisters”

There was a photo with that unmistakable grin.

She was standing next to two younger women.

Both women reached her shoulder.

Budi found work in Medan, at the bustling wet market.

She met her husband Mas, a lorry driver there.

They dated and decided to marry.

The Story of Salt and Black Tea

Budi journey to her husband’s home in the hills of West Java – home of the tea plantations.

The much-loved brew comes at a high cost to the tea farmers – unfair wages, malnutrition, and high maternal mortality.

In the 19th century, colonizers would give laborers salted black tea to help replace the essential salts lost through dehydration.

A cup of salted black tea is what many teas plantation families drink for energy.

Each generation born on the plantations produces the next batch of laborers, drinking salted tea has become a daily habit.

The entire family were farmers and eked out living planting tea leaves.

The smallholders in West Java and West Sumatra have small plots of land located in remote locations.

She was shocked that they had so little.

They had a gruel made from corn with bitter tea berries and fried shaved coconut with salt for the wedding feast.

The star dish was RICE!

The farmers were so poor that they could not afford to buy rice and salt.

They could grow some corn for their daily sustenance.

When they had enough money, they will travel to town to buy rice and salt. 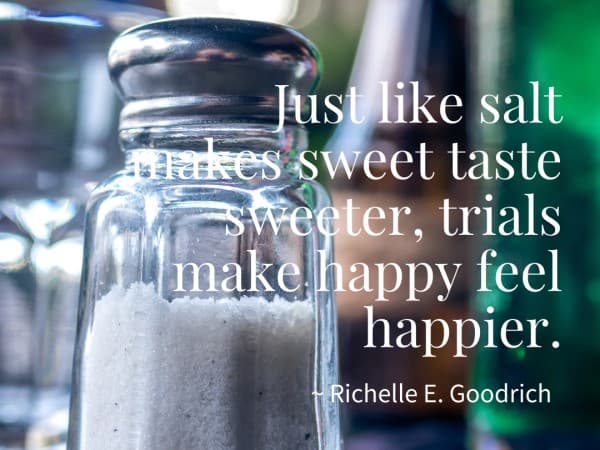 Budi continued planning for her trip home as she cooked lunch.

“I give something good for food.”

She grinned at the happy thought.

I reached for the salt container.

Held it up and stared at the white grains of salt.

I put it back and handed Budi the Soya Sauce.

Source: THE STORY OF SALT AND ITS DIFFERENT VARIETIES